Dental implants should be spread out from each other when replacing a full mouth.  Just like the legs of a chair, the farther they are spread out the better stability. 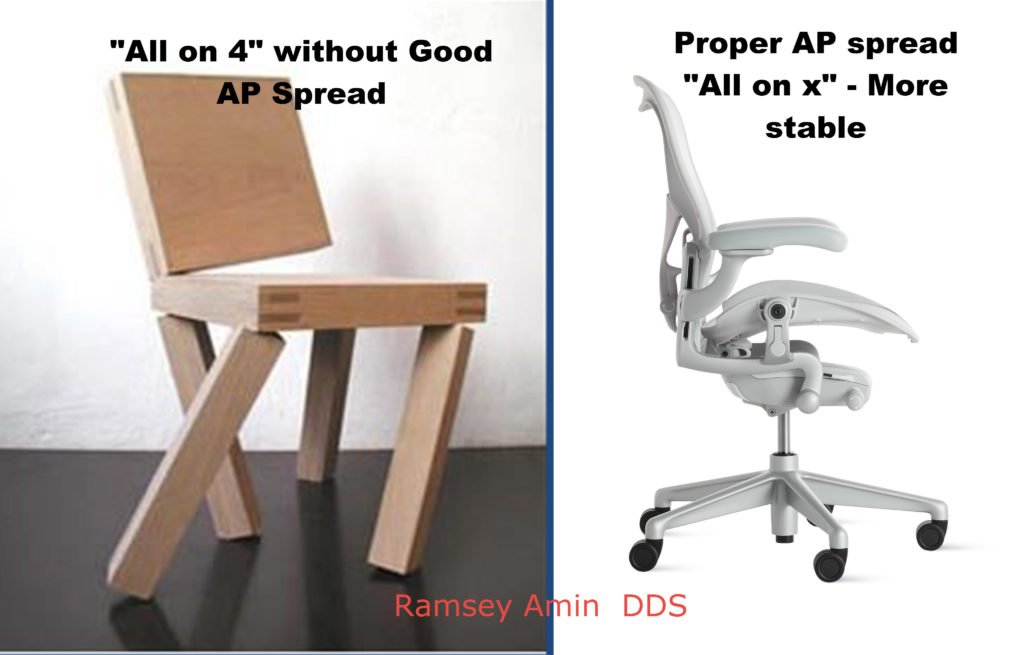 In implant dentistry this is called “AP spread” which means anterior/posterior  spread.  Just as important as the number of implants is the position of the implants.

What happens? Sometimes on the upper jaw it is not possible to spread the implants out as far for an all on X/all on 4 dental implant Prettau zirconia bridge.  This is usually because the sinuses are too large and really far forward rather than being towards the back.

If the implants are all squished up in the front, this leads to a longer cantilever on the back than what I would typically want.  Ideally the implant should be under the bridge without an extension…like a diving board.  Usually this is not possible and a short diving board cantilever is necessary.  A way to remedy spreading out the implants on the upper jaw is to either do a sinus lift bone graft or placing zygomatic implants.  This gives implants towards the back  molar areas where you have the heaviest bite force.

In the image you can see two different chairs.  Obviously one would be more stable to sit on than the other.  Having more legs is always great, but the leg positions is just as important as the number of legs.  Most chairs only have 4 legs and can be very stable.  In the mouth I prefer the upper jaw to have 6 implants.  The bone on the upper jaw is so much softer than the lower jaw so the rules are not the same.

Many dentists believe that all on 4 implants on the upper jaw is all that you need.  The reality…if one of them fails it becomes “none on 3.” No spare tire.   The entire bridge would have to be remade….all is LOST.  This is most important in the UPPER jaw.

The better the spread of the implants also gives me a higher chance of providing immediate loading which means you get your teeth installed on the same day or by the next day at the very latest!

Here's Why You Have a Runny Nose After a Dental Implant

My Implant Fell Out!