Dental implant specialist??? Burbank's Ramsey Amin, DDS is a credentialed member in both of the organizations mentioned below:

Judge John Mendez of the United States District Court for the Eastern District of California on Friday, October 15, 2010 ruled unconstitutional the California statute that effectively restricted the advertising of AAID and ABOI/ID credentials. 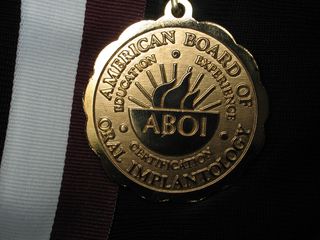 In his written opinion, the Judge stated "…American Academy of Implant Dentistry and the ABOI/ID (The American Board of Oral Implantology / Implant Dentistry) are in every facet of the word legitimate, bona fide, well-respected organizations.  These are not fly-by-night credentialing organizations.  They take their role and responsibility seriously."

The Judge further stated, "…AAID and ABOI/ID are bona fide credentialing organizations whose standards are rigorous, objectively clear, and verifiable."

The Judge further noted that the two specialists who testified as witnesses for the State of California had also sought out additional training from the AAID.  "That I think speaks volumes as to how AAID and ABOI/ID are viewed within the profession.  It is a bona fide organization in every sense of the word."

Here's Why You Have a Runny Nose After a Dental Implant

My Implant Fell Out!