If you have a root canal and now need a dental implant there are some very important issues to be aware of.  This is especially important if the tooth to be extracted is in the upper front area. It will have consequences on the final result and cosmetic appearance of the implant.

A previous failed root canal can be a major detriment to having an implant.  The problem is related to a hole that develops in your bone which dissolves the very thin outer wall of bone.

Although root canals work, they are not 100% effective. Some teeth may not respond as expected to the root canal therapy.  Sometimes, it is clear from the beginning that the root canal is not working as planned. Other times, it may be years later that a problem arises.

The problem is usually re-infection of the root canal or a broken, fractured root. This usually shows up as a painful pimple on your gums.

Often times a root canal is “re-done” if the root becomes re-infected.  I have seen patients that have had the same root canal done 2-5 times before finally extracting the tooth and having a dental implant!

The infection causes bone loss to occur around the root where you would need bone for a dental implant.

What is An Apicoectomy?

An apicoectomy, or “reverse root canal,” is sometimes done as a last ditch effort to save an almost hopeless tooth with a root canal.  It does not have a very high long-term documented success rate.  You have about a 40% chance of losing the tooth in 5 years.

The Procedure: Surgical access is made through the bone, and the tip or apex of the root can then usually be seen through this “window” in the bone. The tip of the root is cut off, and a sealing filling is placed at the end of the root. 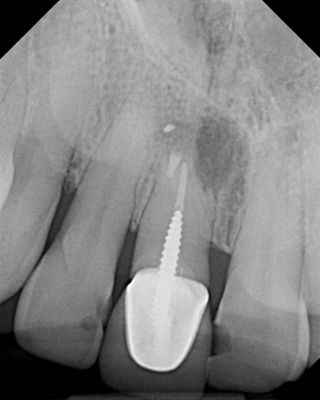 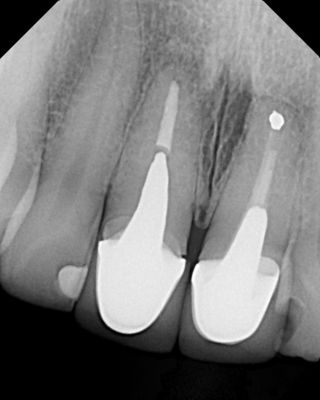 That is where the problem occurs.  The hole made in the bone to do the procedure does not always heal leaving a defect under your nose if it is in the upper front.

This CT scan image of my patient that I treated in my office in Burbank shows this exactly: 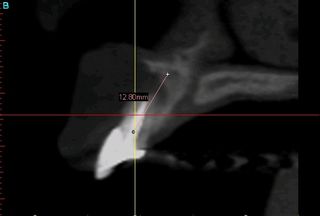 Although, this hole is correctable, it usually requires a more extensive bone graft to correct.  This increases the cost and time to have the dental implant.

The worst case scenario is where the “apico” fails and the entire outer bone wall is lost. This usually requires and onlay block type bone graft taken from your chin or the side of your jaw to correct. The block can also be taken from cadaver bone also.

My recommendations…look at all your options and plan for the long-term.  Saving a hopeless tooth may in fact be more problematic and costly than extracting and maybe having a same day immediate implant.

Please feel free to comment or ask questions in the comments section below.

Gap Space Under My Implant Bridge